Veiling lacquer in the wood finishing 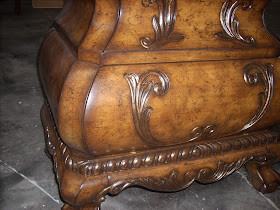 Veiling lacquer should be applied with a special spray gun to produce the desired effect. To get the effect, we need to let the material is splashed with very minimum air pressure. The pressure port gun or the spatter gun is the best toll to apply the veiling lacquer. But if there is not available, a gravity cup gun with the proper settings can be used but with little bit limited in result. The spray gun is set with low volume of air pressure so the material can be spread without atomization. The spray gun is set in the low air pressure with the material is also in small amount. The out material will result in material expenditures such as ropes that are not continuous and would result in such form random cobweb on the surface.
After the veiling lacquer is laid off at the surface, then it has to be layered with a layer clear coat (sealer or top coat), otherwise it will easily detached from the surface. One layer coat with sealer or top coat lacquer will give the protection to the veiling effects and make it is strongly stuck to the surface.
We can continue do dry brush glaze on the veiling lacquer to make more dramatic effect. The combination of the veiling lacquer and glaze is making the very attractive antique finishing. 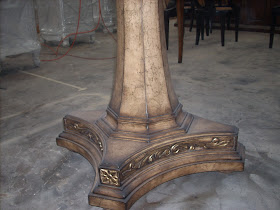