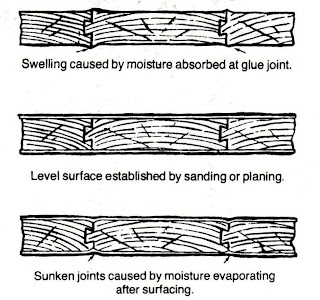 Most of the glue, except of the synthetic hot press glue are water based, mean that they contain a considerable amount of water. When the pieces of wood are glued together the moisture is absorbed from the glue to the wood, increase the total moisture content of the wood. Especially if the thin piece of wood such as veneer is glued, when the total absorbing surface is considered large amount to the total volume of the wood.

The moisture content of the core stock at the time gluing is very important. The best authorities seem to agree that moisture content about 5 % is advisable and then the gluing process will add the moisture content. The moisture will distribute itself by conditioning treatment after the veneer has been laid off. The thinner the core stock the drier it should be at the time of laying cross banding and veneer.
Since the cross banding usually rather thin as compared to the core, it should be dried and treated as the sane ways as face veneer. As General rule, the moisture content should be about 5 % at the time of laying. The cross banding is usually spread with glue on both side. One side is being place against the core and the other against the face veneer. The wood will pick up considerable moisture from the gluing process, but this can be redistributed by mean of condition treatment after the panels has been built up.
Just before laying the veneer, it should be re dried to a moisture content of 4 to 6 percent. Some prefer higher M.C., this lessen to the liability of fancy, cross grained veneer to break in handling. Consequently such veneer is sometimes laid with moisture content of 8 to 10 %. The amount of shrinkage in the face veneer when it dries out will be greater under this condition than if the veneer were laid at moisture content of 5% – 6 %. If the veneer was too fragile to be handled at lower moisture content it is almost certain not too be strong enough to resist the greater tendency to shrink, and checking of the face veneer will probably result causing check and cracks in the finish.
The use of moist veneer in building the panels also results in much more warping than is obtained when the dry veneer is used. Where there is a manufacturing advantage in using moist veneer, this increased warp and liability to checking must be taken into consideration as disadvantage which will partially or entirely offset the gain from the from using moist veneer. The moisture content of the back veneer should be as the same with the face veneer. Otherwise one will shrink more than the other upon drying the glue up work and may result in warping.
The pressure should be applied to the panels as quickly as the veneer is laid to prevent the thin veneer to expanding too much. The incorrect position of the veneer when held by glue will result in the formation of check as the panel dry out.
The panels should be left in the retainers until the glue is fully dry. As the panels are removed from the retainer, they should be piled on special trucks with stick of exactly uniform width and thickness between the panels. Each stick should be placed directly above the one below to ensure the plywood drying is straight.
It is evident that the built up panels must also be given a conditioning treatment after gluing to bring the moisture content to the right point