wisno 1 comment
Acid curing, melamic or melamine clear coating is a coating that uses an amino resin in the mixture. The amino resins are the product of the reaction between the formaldehyde with materials containing amino group. The amino that most widely used is a melamine or urea, that way it is also known as melamine paint. The amino resins when it is used alone will produce a hard and brittle film. In the coating it is used in the combination with other resins such as: acrylic, alkyd or polyester. The amino resin will do as a hardener (curing agent) or the bond-forming polymer chains (cross linking agent) to make a strong, insoluble and thermoset film. The film result is hard, high resistant to scratches, solvents and heat.

The advantages of acid curing clear coating
The resulting film layer is formed from a chemical reaction that is strong, resistant to heat, scratch and solvent. It is suitable for finishing that needs stronger film resistance such as: dining table, kitchen cabinets, desks, furniture for hotel, bar, etc.

This coating has higher solid content than nitrocellulose with the same viscosity. This coating can produce a thick layer film with less application. When it is dry, the resulting film layer would not be resolved with solvent. It can be used to make close pores finish faster and easier then the NC finish.

The disadvantages of the acid curing clear coating
The uses of amino in the formation reaction, make the paint will emit formaldehyde gas during its curing process. Formaldehyde is hazardous gas; it could interfere human health if it is inhaled. The curing reaction to produce dry film actually is relatively fast about 24 hours. But the reaction is still continue running for long time so that the gas emissions still is occurred for a long time even with very small amount. It makes the finish still smell formaldehyde for a long time.
The resulting film coating is the result of a chemical reaction make it has slightly blurred appearance. The film has less clarity compared with the nitrocellulose clear coating. Too thick  application of the avid curing coating will make the film is thick, less clarity and look like plastic. 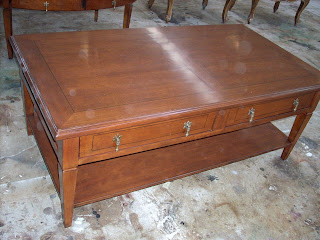