Viscosity is an important properties of the finishing material. By the physical and chemical engineering definition, the viscosity is the resistance offered by the fluid to the relative motion of the particles or as the internal friction off the liquid. Viscosity of the finishing material is important properties since determines to a great extent its ability to be brushed, sprayed or dipped as well as its flowing after being applied. Materials with low viscosity will flow better than high viscosity because of less internal friction. From this point it is easy to understand that the viscosity of the material is more important to relate with the method of application of the material. For example the material that is designed to be applied by brush needs different viscosity with materials that designed to be applied by spray.
Viscosity is not really correlated with the film thickness that will be built by the material. Some peoples may think that the more viscous material then the more the value of the material, because that material must be reduced to a greater extent before it is applied. This may not true, especially in the case of lacquer and synthetic materials. With the advanced methods it is possible to make the finishing materials with low viscosity that can give more film thickness. On the other hand there are many products so viscous that must be much reduced before they applied but have low solid content. The viscosity is also a function of temperature, since that at the time of measuring the viscosity of a certain material, it is recommended to measure and check the temperature of the material.
It is false economy to figure that because a given product need to reduced at the rate of two parts to one part of thinner it is cheaper than another material which can be applied straight without any solvent. This may not be true, since it depend on the other characteristic of the finishing materials and also the solvent used. Usually the objective to applying the finishing materials is to give the necessary protective and decorative properties demanded by the finish product. If a film thickness or color can be produced in one coat with unreduced material, where two coats of reduced materials is needed, the one coat materials is always cheaper in the end cost, because of the saving labor and total material use. 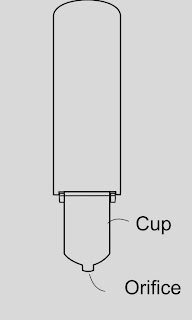 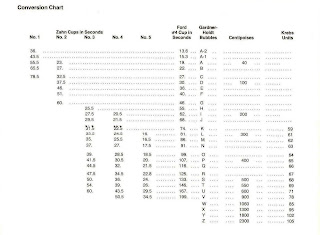 the conversion table for some viscosity cup measurement