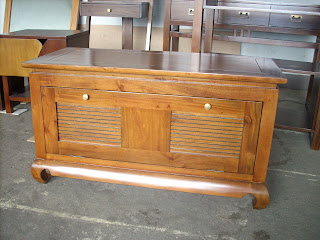 Shellac is a finishing material that is very popular and widely used in wood finishing in the 19th century until the early 20th century when it started to be replaced by nitrocellulose and other coating materials. Shellac is made from natural resin produced from an insect species that live in plants in . Shellac can produce a film layer and be able to protect the wood surface underneath. Shellac used to be padded with cloth or brush since long time ago when the spray system has not widely used in finishing material applications. Now the shellac is more be applied by spray. We can spray shellac as well as the other clear coating and more even and smooth film surface can be obtained.

Shellac is a lot of available in the pieces or flakes form. The pieces should be dissolved in alcohol or ethanol until it melts in liquid form when it is applied. Shellac is also available in liquid form, but it will not last long, so peoples prefer to keep the shellac in the pieces. Shellac will be able to last longer if keep in flakes, and dissolved only when it will be used. Shellac is naturally a yellowish-brown color, its application will produce the yellowish brown color film. The shellac color of course will affect the resulting color of the final finishing. The finishing color obtained will be the result of a combination of yellowish brown color of the shellac and the wood base color underneath. The thicker shellac layer formed the more yellow color is resulted.
To do the finishing with light, natural or white color, the yellow color of shellac could be problem, since it can change the resulting finish color. Then it was developed the colorless shellac (clear shellac) which is known as bleach shellac. Bleach shellac is clear shellac without color so the resulting film layer is colorless, it can be used for the light or white colors in the wood finishing.
Shellac usually contains wax in the mixture. The wax in the shellac will reduce the clarity of the resulting film layer, and also reduces the adhesion when the shellac is coated with other finishing materials. To make better adhesion we need to use the dewaxed shellac, the shellac which his wax content was already removed.

The applications of shellac 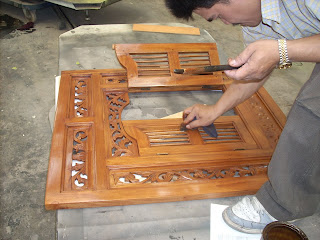 The shellac application by brush and rag

Although the current usage of shellac could be replaced with coating application, but there are some peoples are still using shellac to finish the wood. Compared with paint, shellac has several advantage: ease in application and the environment friendly. Shellac can be applied in a simple way, by padding with rag or by brushing. The shellac application with a cloth or brush application has been known since the first time people knew the shellac for wood finish, and this method are still performed in some finishing shop today.
The shellac is relatively very safe material, does not release harmful gases. Alcohol as his solvent is safer for the environment and human then the other chemical. As well as varnish applications, shellac also requires several times layer to produce a thick film layer. The thicker shellac on the surface, the higher the gloss of the film layer is resulted. Shellac relatively faster dry than the traditional varnish, because alcohol evaporates faster than mineral spirit. If we want a faster drying, we can use methanol to dissolve the shellac.
Now more shellac is applied by spray since it is faster and can be better control and give  the better result. Now, the shellac application is mostly used in the combination with other modern finishing materials such as: glaze, stain or other clear coating. Shellac which is dissolved with alcohol can be coated with the other modern clear coating. The most widely used is nitrocellulose, but other type of clear coating can also be applied over dry shellac layer.
The adding color in the shellac can be done by mixing the pigments directly on the shellac mixture, but it will make the application is rather difficult. It is difficult to control the color since we have to do staining and film forming in the same time. We can easier control the color by apply the stain to make color at the first step, and then apply the clear shellac to build the film layer at the second step. If necessary we can add some more stain on some light part which need more color  and still apply same layer shellac coat for the overall surface.

The shellac self life

Shellac is the natural resin that is composed of complex organic acids. This acid will react with the alcohol. The reaction will make the shellac to become softer, gummy and won’t dry in application. If you want to apply shellac you may need to test first to make sure that the mixture is still in good condition. Drop the shellac into a glass and let him dry. In about 15 minutes the shellac should has to be touched dry, and if the shellac is not dry after overnight it means that the shellac is already not good..
Shellac in the flake is also has a self life that depend on the storage condition but sure his self life is much longer than the liquid form. The dry shellac will polymerize to form different molecule after a period of time. And it will make the dry shellac wont dissolve in the alcohol and cannot be used anymore.

2 comments for "Shellac for wood finishing"