Heartwood and sapwood according to the woodworking. 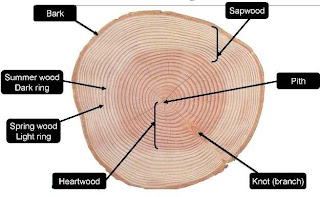 If we cut tree on a cross-section we will see that there are many circular layers at the wood log. The circles at the wood actually show the annual living of the tree.  At his lifetime, the trees grow in the tangential and radial direction. The axially growth is occur with the forming of woos cells at the tip of the tree, including the formation of the branches and new tips.  While the radials growth occurs with the development of cambium. Cambium is the outer part of the wood log, where the new wood cells are formed. The wood cells from the cambium are growing to be the young wood tree which is called the sapwood.  The sapwood will continue grow to become the heartwood the old wood tree where the wood cell has stopped grow and the wood already reaches his maximum strength.  The life circle from the cambium to be the sapwood and ended with the heartwood is fulfilled at one year. Then actually we can see the age of the wood by viewed the wood ring.
In the woodworking industry, the heartwood is the wood part which has maximum value. The heartwood is the wood with its maximum strength. It is strong, dense and durable.  The heartwood can be viewed clearly different with the sapwood according to its properties. Here are the important properties of the sapwood and heartwood according to the woodworking industry.
Heartwood is part of the tree that already has the maximum strength. During its lifetime its main function is to support the tree to keep standing. It holds the tree against the wind, rain and other natural disturbances. It is physically tough, strong, dense and durable. Most of the heartwood is also high resistant to the insect and fungi.
While the sapwood function to bring the water and nutrition from the soil to the leaves.  Sapwood is physically soft, less density, weak and less durable. The sap wood of any type of wood is vulnerable to get attacked by the insects and fungi.
Heartwood also provide the best appearance the grain and pores. He has the maximum appearance according to the pores and grain. He shows the strong pores and grains pattern both in appearance and texture. In the premium wood such as: rosewood, sonokeling, and walnut we can see the black stripes very clear on the heartwood. In another wood such as: mindi, teak, mahogany then we can see the grain and pores texture are very strong at the heartwood.
Meanwhile the sapwood usually has the vague and soft grain pattern. Sapwood in the rosewood, sonokeling and walnut seem as the soft pattern, there no or less black strip at the wood. The sapwood for mahogany, teak and mindi will also display the shallower grain and pores texture.
Heartwood can be differentiated from the sapwood with its basic color. In some timber such as the rosewood, walnut, and sonokeling the difference of the wood base color could be so contrast. But for the wood with light base color such as: maple, teak, sengon, pine, hence the difference in color between sapwood and heartwood will be less contrast.
Although the wood properties is highly depending on the type of wood, but generally the heartwood is much more stable then the softwood. The heartwood is less permeable, less hygroscopic and less contraction according to the wood moisture content changes.

The utilization of the sapwood. 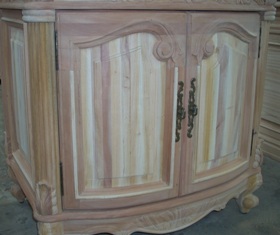 mixed of sap wood and softwood in the furniture

The use of the heartwood in the woodworking industry is undoubted. When we mention about the wood properties at the woodworking it is always refer to the heartwood. Meanwhile the sapwood is the cheap part of the wood log.  In the past, when the wood is available abundantly, the sapwood is usually discharged or separated and sold in the cheaper price. But this time when the wood price is expensive, the sapwood is also much used.
To prevent the insects and fungi attacked, then the treatment with the anti insect repellent or anti-fungal is used. With the consumption of the wood that keeps increase and more wood type are used, then chemically treatment and preservation is already considered as the standard procedure in the wood utilization.
Meanwhile variation of the base color and difference color between sapwood and heartwood could be anticipated by the application of finishing. With the proper stain and application technique we can handle the variation of wood color to make the uniform color to the final product. The light color of the sapwood color even could be an advantage because it can generate the finishing with light color if needed.
The sapwood at heartwood can be mixed and laminated to make a big and wide panel.  With proper gluing, the laminated wood is more stable and stronger than 1 piece wood plank.
The veneering technology has also made the utilization sapwood more optimal. The sapwood veneer can be separated and sold with cheaper price. The less strength of the sapwood would not be a problem at the veneer since it is only thin layer, the structure is built by its core. The soft wood grain and pores pattern are could be an advantage because it can produce a softer appearance. The light basic color sapwood is also an advantage because it will provide higher flexibility in the final color choice.

2 comments for "Heartwood and sapwood according to the woodworking."