Blushing problem in the furniture finishing

wisno 3 comments
Blushing is one of the finishing problems that often arise in the finishing process. Blushing is the emergence of a thin haze layer on the finishing film layer. Blushing can be shown as a thin layer of fog, but in some severe cases blushing may be seem like a rainbow in the coating film. Blushing is caused by some moisture that is trapped in the coating film during the drying process. Water vapor  in the coating make the haze looks or a rainbow in the film layer. Blushing can be happened at the sealer and top coat. But the blushing in the sealer layer won,t  be problem since it can be eliminated by do sanding and re coat with the good clear coat. The blushing will be problem in the last coat since it will affect the finishing result.
Blushing is happen when we apply clear coating in the very humid environment. Water vapor in the air will come in and trapped inside the film layer. Blushing is more easily occur if the application is too thick and the clear coating and thinner is not good mixed (bad quality of thinner). The thinner that contain too much diluent will be difficult to be released in the paint mix. This condition will increase the risk to get blushing. 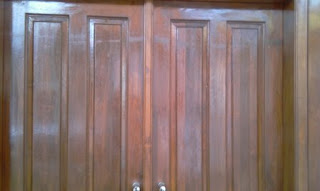 blushing at the wood finish

Generally blushing problem is relatively easy to be handle in the process of finishing. Here are some ways to reduce the possibility of blushing:
Thinner is added to the finishing material to dissolve the materials in the purpose of reducing viscosity. It is important that a thinner should have enough solvent (the material that solve the clear coating). The diluent in the thinner actually will reduce the performance of the mixing paint. It is better to choose paint thinner that containing sufficient solvent to reduce the incidence of problems in the finishing process. Too much diluent in the thinner will disrupt the process of evaporation in a finishing process. Some finishing problem including blushing can easily be healed by the using of appropriate thinner. To see more about thinner You can view it in my previous articles: thinner for wood finishing.
The applications of the clear coating that are too thick will make the evaporation process become difficult and take longer time, this will facilitate the occurrence of blushing. Coating application should be done in a normal thickness. One layer of clear coating or a maximum 2 layers and followed with adequate drying and sanding is safer and will produce a better surface finish than many layer application wet coat at one time.
Oven is facilitation to control the air temperature and humidity. When the air temperature is cold and humidity is high, then the finishing process would be severely disrupted, including the risk of blushing. The oven that is provided in the finishing room will help prevent these problems. With the oven we can control the temperature and humidity in finishing room independently with the environment condition.
Retarder is a solvent that is used to slow the drying process. Retarder usually is added in the top coat mix. The addition of retarder will make the drying process of the top coat run slowly and will provide the more time to let the water vapor in the coating layer to get out and released from the layers of film formed. Many blushing cases can be solved with the adding of retarder. However it should be maintained that the addition retarder is not too much. Too much retarder will make the drying process becomes slow. It will slow the entire production process. The addition of retarders can also affect the gloss of  the coating films produced.

How to fix blushing in the finishing layer?

The blushing if is formed in the finishing layer will ruin the appearance of the finishing and it has to be fixed. There are some ways to revise it. For finishing film that the  material  is dry without chemical reactions such as NC, the blushing can be eliminated by sprayed with thinner. A mixture of lacquer thinner and retarder can be  sprayed on the blushing part to let the water vapor evaporate and make clear finish. Blushing also can be eliminated easily by rubbing the surface. Simply rub using a steel wool will get rid of blushing that existed at the surface finishing. But for finishing materials that can not be resolved like PU, AC or water based, this method does not work. To remove the blushing, we need to clean the blushing part by sanding and then re coat with another layer of top coat or sealer.

3 comments for "Blushing problem in the furniture finishing"