wisno 1 comment
Matting agent, flattening paste or flat paste is an additive material that is used to reduce the gloss of the resulted film produced by a clear coating (top coat). The pure coating is made of a resin mixture that will produce a clear and high gloss film when it is applied at a certain surfaces. When the coating is first time invented and introduced in the wood finishing, then it is quite difficult to make the finish with low sheen. The low sheen finish was made by adjusting the film thickness or rub the dry film resulted. But now with the matting agent additive, then we can make a finish film with the desired gloss by using the proper top coat. With the addition of matting agent, now the top coat can be made and is available in many gloss level. Then now, every finishing people can easily choose the top coat with the proper sheen according to the finishing requirement.
The first matting agent was made from the silica that was finely grounded and pulverized, but now with the development of chemical technology there are some other materials are developed to be used as matting agent (matting agent additives). If the paint is colored, then the pigment color also can do as matting agent. The matting agent works by refracting the incoming light at the coating film to lower the gloss of the finishing film. (The gloss in the wood finishing).
Now most of the modern top coat are produced and sold with some matting agent inside according to the gloss of the top coat. But we still can also buy the matting agent material to adjust the sheen of the top coat gloss ourselves. To set the gloss level of the top coat we can also mix the top coat with different glosses with the proper ratio. 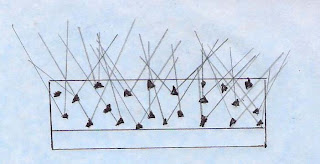 matting agent is refracting the light at the film surface